Last weeks New York City Marathon was the perfect way to kick off our month of gratitude.

When is the last time you looked past the long training days or disappointed race and realize how really fortunate we are to be able to swim, bike, and run?  Hopefully these 2 people will inspire gratitude the way they did for us!  Even in the trials, we can look back at all the races we have been able to compete in and look forward to all the races you will do! 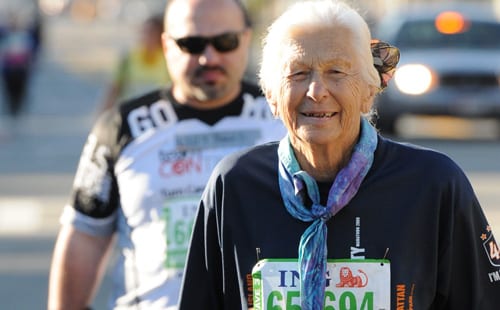 We found this great story on Runners World Newswire:

Joy Johnson, who at 86 was the oldest woman to complete Sunday’s New York City Marathon, died on Monday at Bellevue Hospital in Manhattan.

As the New York Daily News reports, Johnson fell and hit her head on pavement near the marathon’s 20-mile mark. Medical personnel wanted to take her to the hospital, but she insisted on finishing the race, said her sister, Faith Anderson. Johnson finished in 7:57:41, her 25th New York City finish.

In a pre-race interview, Johnson said, “I’ll be at the back of the pack, but I don’t mind. I just praise the Lord I can get out of bed each morning and run. A lot of people my age are in wheelchairs.” On some days, Johnson would do 150 push-ups.

She was a gym teacher who took up running upon her retirement. Johnson was one of just 31 starters over age 80 in New York City on Sunday.

“I always say I’m going to run until I drop,” Johnson said the day before the marathon. “I’m going to die in my tennis shoes. I just don’t know when I’m going to quit.” 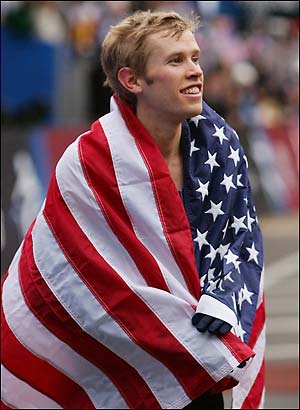 Ryan Hall is a favorite athlete of ours.  It was disappointing to hear he was not going to be competing in the New York City Marathon this year due to a hip injury.  This is what he said:

“In my zealous efforts to have redemption in this year’s ING New York City Marathon, I overstepped the first and most important rule—making it to the line healthy,” Hall said in a press release. “A long string of very aggressive training has aggravated my hip and it has not been able to fully calm down, such that I don’t think racing on it is wise. I am very disappointed that I won’t be lining up on November 3rd as I had so looked forward to, but I am refocusing now on getting back to 100% and going after some big goals in 2014. Redemption will have to wait, but it will be all the more sweet.”

Even in set backs, Ryan is a great example of being grateful – the injury is only temporary he is keeping is eyes on the 2014 goals rather than the disappointment.  Ryan’s book “Running With Joy” is a great resource for anyone wanting to find the joy in what they do.