My training for before Kona was a low-key, because qualified for Kona at the US Championship Ironman in New York in August.  I didn’t want to “overtrain”, so I was still doing marathons pretty much every weekend. I kept up my swimming in the pool every day! I also did a couple of “open water swims” in the river here in Pittsburgh, as well as Lake Erie, right before and after the Erie Marathon in September.  I would spin 2-3 days a week, as well as getting out two times a week on my own bike.  I also did a double marathon the weekend before the Kona IM, pacing St. George on Saturday, then pacing Chicago on Sunday, and then flying out to Hawaii on Tuesday morning. 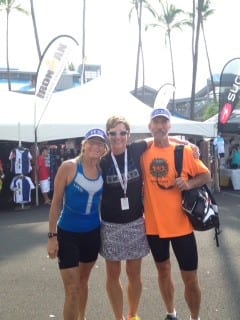 My training in Kona was very little since it was “taper time”.  I was staying at a house 4 1/2 miles from the start, and I rented a bike. Each of the three mornings pre-race day, I rode to the start, did a practice swim, and rode back to the place I was staying.  On the way back to the house, the expo was set up along the main highway.  I was lucky enough to find SkinStrong set up there, and was SO excited to see my friends whom I had met last year in Tulsa, Oklahoma at the marathon expo in November!  What a pleasant surprise!! I used that sunscreen the whole week/weekend I was there and “no worries” about getting sunburned, for sure!!!  There was a very steep 1-mile uphill on my way back to the house, so that was enough of a workout each morning after the swim.  I think another one of the highlights, and great  memories that week, was the boat we got to swim out to for coffee.  It was awesome.  Each morning from 7-10, about 400 yards into the swim, there was a boat which you could swim out to, hang on to the side of it, and have a little cup of coffee.  That was awesome, and I had so much fun doing that with some of the other athletes!

It really hit me that I was at the World Championships the morning of the race when I went in to get “body marked”.  In all of the other Ironman Events I have done, I have been marked on my arm with a black marking pen. At Kona, all of a sudden, I was being marked with BIG stamped numbers on my arms.  That is when the tears came down, and I knew this was “the real deal”!!  It was “official”!!!  Each moment after that, was one to remember!  I started to get a little nervous when my friend said, “you have done these before, what is the big deal?”  I responded, “I have never done the World Championship before, and this is BIG!”  I wanted to just savor every moment, and didn’t care about my time anymore. I just wanted to enjoy the experience, as I knew this was going to be a “one and done”, just like Western States 100 mile run and Badwater 135 mile run in Death Valley.  I felt honored and proud, just to have made it to this point.  I also was very proud to have my hometown race, the Pittsburgh Marathon as well as NuGO sponsor me.  I wore a really cool hat that the art teacher at my school made for me, with a bridge on it that said “Run Pittsburgh, 5/5/2013” which is the date of our Pittsburgh Marathon!

The swim start was another tear-jerker.  I couldn’t believe all of the spectators linedup along the wall, the same wall that was empty the three prior days during my open water swim practice!  It was a very cool thing when the cannon went off and everyone started to swim.  I couldn’t admire the fish that swam in the crystal clear-water during my practices, because I had to “get the job done” on race day!  It was a very hard swim for me.  They told me later that the swells were very big, which is why the kayakers were taking videotapes of them.  Nice for them, but not so nice for me.  It seemed like it took forever to get to the boat at the turn-around point, and I was pretty worried about the cutoff time at that point.  I saw a kayaker who was cheering me on, for quite a few strokes, so I decided to thank her for being there. This was another highlight of the race. I always thank the volunteers during a race; swim, bike, and run sections.  So, I turned my head and said “thanks for being here” on the first stroke, “you rock” on the second, and “you are awesome” on the next breath out of the water.  Well, she said “YOU are awesome” back to me the next time my head turned toward her.  That really made me smile.  From then on in, she followed me all the way in to the shore.  She even kept wishing me luck and encouraging me, using my name, which she must have looked up from the number on my swim cap.  Anyway, the bike was tough, as the winds always are.  The crosswinds, and then the rain that hit at mile 48, made it hard to ride, and I was a little stressed during that part.  They said later that the winds were tougher that day than they had been for the last 10 years.  That made me feel a little bit better!!!  I think the best part of the bike and the run were the volunteers at the aid stations and the spectators along the roads.  They really made the race!!!  I was SO happy to get to the finish line, where the cheering kayaker, Cathy, was waiting for me. I will never forget her!  That has to be the most touching part of my whole trip and race in Kona!